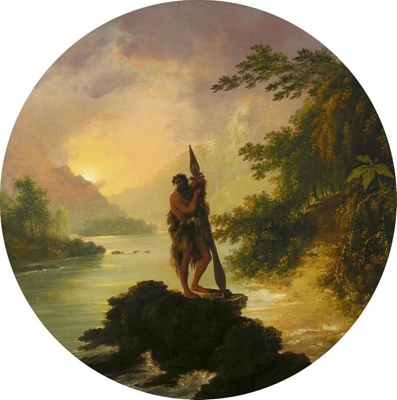 William Hodges was the artist on Captain James Cook's second voyage of exploration to the Pacific. Reaching New Zealand on 26 March 1773, the Resolution sailed into Dusky Sound where the crew recovered from their gruelling voyage and set up an observatory to help fix the position of New Zealand on the globe. George Forster, naturalist on board the Resolution, described the scene when they arrived: 'The smoothness of the water, illuminated by the setting sun, the different degrees of verdure, and the various notes of birds which resounded throughout the whole cove during this calm evening, greatly softened the rude, uncultivated outlines of this landscape'. Hodges made sketches of the Mäori family they encountered in the area and watercolours of the bay, with sharply outlined hills and turbulent skies. Cook was delighted and wrote that Hodges had 'delineated the face of the country with such judgement as will at once convey a better idea of it than can be expressed by words'. In this painting, produced after Hodges returned to London, Forster's rude, uncultivated landscape is transformed into a sublime vision: a solitary, noble Mäori figure silhouetted against a paradisial sunset. A more elaborate painting showing the same figure with his family, Cascade Cove, Dusky Bay, is at the National Maritime Museum, Greenwich, London. (from The Guide, 2001)