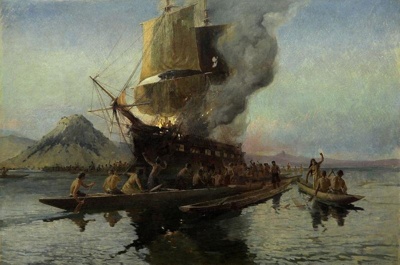 The Burning of the Boyd, Whangaroa Harbour, 1809

Depicting one of the most notorious events in the early European trade with New Zealand, this painting demonstrates a turn-of-the-century focus on local history subjects to foster national identity in art. En route to Cape Town from Sydney in 1809, the Boyd anchored in Whangaroa Harbour, Northland, to load kauri spars and allow Mäori passengers to disembark. Contemporary accounts suggest that the flogging of a rangatira during the voyage prompted the events that followed. The captain and crew were lured ashore and massacred, the ship was looted and an exploding barrel of gunpowder killed more people. The artist represents this dramatic moment in an image which successfully integrates two traditional subjects of European art - the battle at sea and the coastal landscape. By using a low viewpoint and placing the waka in the foreground, Wright enhances the impression of a ship under attack, a symbol of civilisation and Christianity succumbing to the dire forces of pagan savages. The symbolism of good and evil extends to the contrast between the Mäori, who are shown in shadow, and the Boyd, in clear sunlight. Naturalistic rendering of detail and refined technique are characteristic of Wright and derive from his study at Heatherly's in London and with Stanhope Forbes in Newlyn, Cornwall. (from The Guide, 2001)