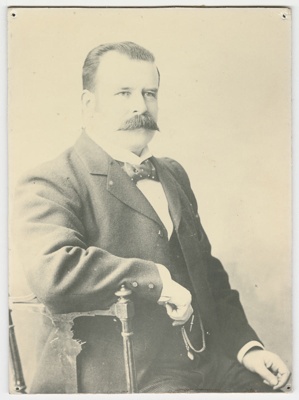 This is a photograph of Sir Joseph George Ward, a Bluff man with an entrepreneurial flair who became the Prime Minister of New Zealand.

A Brief History of a such a Full Life:

Hannah Ward Barron brought Joseph and his siblings up in Bluff as a single mother in the mid nineteenth-century. She was an intelligent businesswoman and from a young age installed in Joseph an enthusiasm for enterprise. Joseph’s trading began at Campbelltown (Bluff) School where he taught fellow students to sell toetoe to local sailors. From then on Joseph climbed the ranks of business in the port, beginning as a message boy in the post office, by 24-years-old he was chairman of the Bluff Harbour Board (1882-1887, 1893-1894). In 1882, at 25, Bluff elected Joseph Mayor of the Borough (1882-1886).

In 1887, he began his national political career as MHR for Awarua, a seat he held for 32 years. Joseph used his various positions in national politics to foster industry in Bluff and promote Southland. Joseph’s interest in private enterprise in Bluff continued in his private endeavours when he established Ocean Beach Freezing Works in 1891.

While in national politics, Joseph continued his position as Chairman of the Bluff Harbour Board and in 1897 the town, again, elected him as Mayor. During this period, some of Joseph’s private business ventures failed. You could not be a Minister while bankrupt, so in 1896 he resigned from cabinet and in 1897 declared bankruptcy. Yet, within the same year, Joseph staged his first of many remarkable comebacks by being discharged from bankruptcy and re-entering parliament through a by-election. Only two years later he became Richard Seddon’s Deputy Prime Minister. When Seddon died in 1906, Joseph was sworn in as Prime Minister (PM) of New Zealand for the first time. Joseph’s time as PM was turbulent. Union Strikes were mounting and the government retaliated by legislating restrictions on striking. Many trades and labour council’s passed votes of no confidence in Ward’s government. Despite this, Ward remained PM until 1912 and was elected again in 1928.

Joseph’s wife, Theresa, had died in 1927 and he found life without her difficult. On top of this, a series of heart attacks left him confined to bed. Pressure from colleagues and family led to his resignation in May 1930. Joseph died two-months later and was buried with his wife in Bluff, near his mother. His 23 ½ years as a Minister of the Crown is still a record and while at times his leadership was fraught, his optimism and his entrepreneurial character, served Bluff and New Zealand well.