German Medal (Replica): Commemoration of the sinking of the ship "Lusitania". WW... 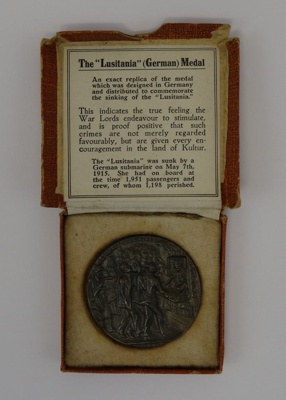 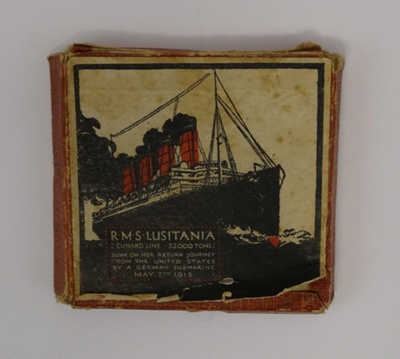 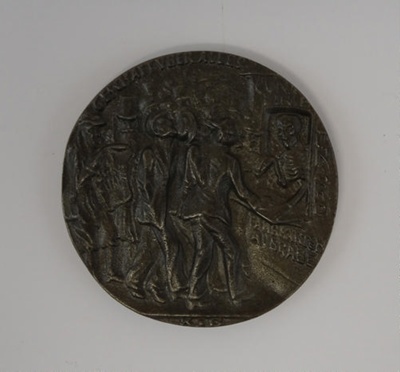 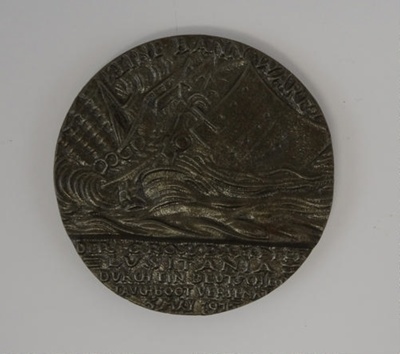 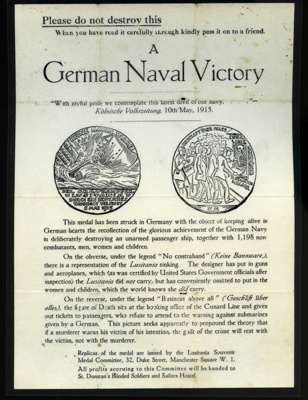 German Medal (Replica): Commemoration of the sinking of the ship "Lusitania". WWI.

This is an exact replica of the medal which was designed and distributed in Germany to commemorate the sinking of the ship. Such replica were made by the British and used for propaganda purposes during WWI.
The German medal was created by German artist, Karl Goetz, who was incensed by the idea that a passenger liner might have been used for military purposes.
The British replica was made and distributed in Britain to protest against the German use of medallic art to celebrate the tragedy. The British copy came in its own presentation box and had documentation which included the reasons behind its production.
On the obverse of the medal under the legend " No contraband" (Keine Bannware), there is the representation of the Lusitania sinking under the waves. There are weapons shown on the deck which is a direct accusation that the ship had been carrying munitions and therefore risking the passengers lives. The reverse side, under the legend "Business above all" (Geschaft uber alles), depicts a scene of unsuspecting passengers waiting in a queue to buy tickets from a skeleton (the personification of Death). The warnings of a German man in the background and a newspaper headline about the dangers of the U-boat are ignored by the crowd.
The date on the medal is incorrect as the ship sank on 7th May 1915, not 5th May as is inscribed on the medal. (The British copied the mistake. On Goetz's original there was a mistake with the date.)

[Disclaimer: This information was created from historic documentation, and may not necessarily reflect the best available knowledge about the item. Some collection images are created for identification purposes only and may not be of reproduction quality. Some images are not available due to copyright restrictions. If you have information or questions about objects in the collection, please contact via wtemus@xtra.co.nz.
How to cite this page: L1988-005-001, URL: http://www.nzmuseums.co.nz/account/3188/object/550942/German_Medal_Commemoration, updated 10 November, 2015]

Commissioned to be made by Lusitania Souvenir Medal Committee, 32 Duke Street, Manchester Square, W.1. (England)
(Profits accruing to the British makers of the medals were to be handed to St Dunstan's Blinded Soldiers and Sailors Hostel.)

Iron, paper, cardboard, fabric. The medal is grey in colour and is heavily inscribed with scenes on either side (as described above). It comes in a velvet lined cardboard presentation box and is supported by explanatory documentation.

The cardboard presentation box has a picture of the Lusitania on the front with the following words; 'R.M.S. Lusitania, Cunard Line, 32,000 tons, sunk on return journey from the United States by a German submarine, May 7th 1915'.
Inside the lid is the explanation: "The Lusitania" (German) Medal, an exact replica of the medal which was designed in Germany and distributed to commemorate the sinking of the "Lusitania". This indicates the true feeling the War Lords endeavour to stimulate, and is proof positive that such crimes are not merely regarded favourably, but are given every encouragement in the land of Kultur.'
Details regarding date and number of fatalities and survivors is also included.