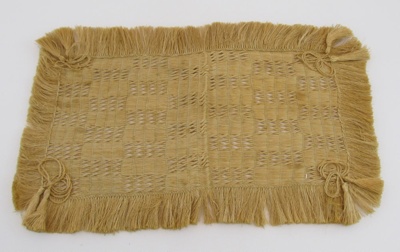 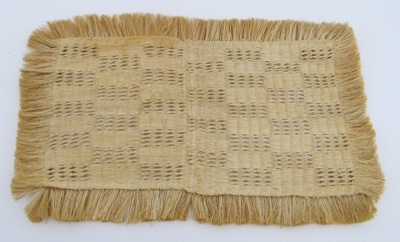 Made in a similar manner as a kete. Rectangular I shape with decorative front and plain back. It has a fringe around the edge and each of the four corners has 2 tassels.

In traditional Māori society, for almost every situation where a container or mat was required, a weaver could manufacture a kete/basket or mat to accommodate that need. For the softest or delicate baskets whītau/flax fibre was used. Whītau, also called muka in some districts, is obtained by stripping leaves of harakere/native flax by scraping with either the edge of a shell or more recently a blunt metal knife. This process exposes the fibres that run the length of the leaves, allowing them to be removed. Sometimes they are softly beaten and/or washed before use.

Given to William Henry Sherwood Roberts who gave it to Herries Beattie, who presented it to the museum in September 1960.

W.H.S Roberts was a member of the Oamaru Borough Council and wrote a 'History of Oamaru and North Otago' from 1853 to 1889. Herries' interests in place names, and his style of writing about them, can be traced to Robert's Maori nomenclature (Te ara-Dictionary of New Zealand Biography)

James Herries Beattie spent 50 years recording the memories of South Island Maori. He carried out his interviews, travelling to more than 20 locations throughout the South Island to find his subjects, persuading them to talk, recording their words and often then writing up the results in articles books for publication.

Herries Beattie was born in Gore and lived there until 1920. In 1922 his family moved from Oamaru to Waimate, Beattie having purchased Manchester’s bookshop in the town. He ran the bookshop until 1939, when he was finally in a position to survive as a research historian.
Herries Beattie recorded not just the details of daily life of various hapū, but also memories of warfare, cycles of food hunting, gathering and preservation, aspects of their spiritual life, their songs and their stories. He also kept a very comprehensive record of Māori place names and their meanings.

“I went among them with no preconceived notions, no theories to uphold, and no previous knowledge to colour what was told to me. I relegate myself to the background, and keep to the simplicity of my informants, and neither overstate nor understate the information give me. It is a faithful record.”

There are people from Waihao who still remember Herries Beattie or recall whānau members talking about him. Apparently he used to travel about the district on a bicycle.

Made by the Maori at Moeraki.