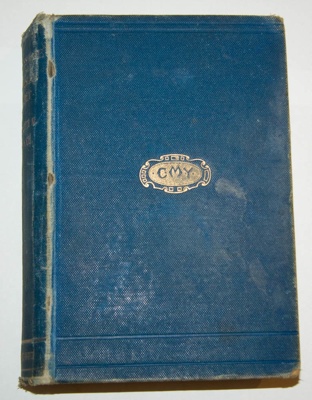 This book was given to Blanche Margaret Ruddock as a birthday gift from her aunt Blanche (also known as Blannie). On the front page is an inscription which reads: “Blanche Margaret Ruddock a present from Aunt Blanchie on her 11th Birthday 1901.” It is likely that this book originally belonged to Blannie or one of her younger sisters as the story was first published in ‘The Magazine for the Young’ between 1844 and 1875 in England. This magazine was initially directed at working-class children and adolescents, but the editors wanted to appeal to a wider range of social classes and so incorporated this story about genteel and aristocratic children.

Charlotte Yonge was one of the most prolific and successful writers of the Victorian era. In her lifetime she published well over 100 books in several genres including history, biography, adult fiction, and children's historical fiction. Yonge was also distantly connected with the Lush family. She was a cousin of Bishop John Coleridge Patteson, the first bishop of Melanesia. (1) Blannie’s father, Vicesimus, was an Anglican minister who served in the Auckland and Waikato regions and was involved with the Melanesian Mission. Blannie and her younger sister Annette both volunteered as missionaries to Melanesia, Blannie in 1878 and Annette 1880. (2)

It is believed that Ewelme Cottage has the largest single collection of Charlotte Yonge's works in the southern hemisphere. Yonge was also the editor of the magazine, 'Monthly Packet'. After her travels to Norfolk Island with the Melanesian Mission, Annette contributed and article entitled "Trip to Norfolk Island" which was printed in the Monthly Packet during August 1881. According to her father, Annette received a cheque for £2.17.0 from the publisher and this was "the first money she has ever earned." (3)


For more information about the Lush family and Ewelme Cottage, which is cared for by Heritage New Zealand Pouhere Taonga, visit our website.