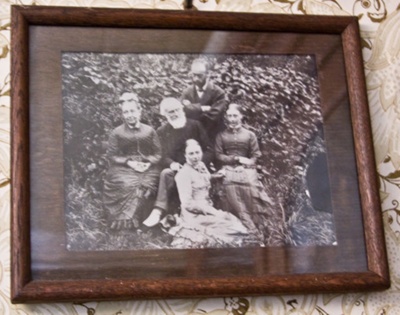 This black and white photograph pictures the Lush family and was taken while they were living in Thames. An inscription on the reverse of the photograph reads: “Taken by Mr West, April 21st 1881.” The members of the family pictured are: Reverend Vicesimus Lush, his wife Blanche Lush, and three of their children, Blanche (known as Blannie), Anne (known as Annette), and Martin.

Blannie was born in England in 1843 and moved to New Zealand with her family in 1850 when her father was appointed the priest in charge of the All Saints Church in Howick, Auckland. As a girl, Blannie received a very thorough education. She was taught mainly by her father, but also attended Miss Hill's private school for girls in Auckland in 1853. (1) As part of her lessons, Blannie’s father would often take her to cultural places such as the opera or theatre. One excursion to the Auckland Museum on 22 July 1856 was described in her father’s journal: “… we met Blannie’s friend Mary Abraham, and I took the two young friends to the Museum, at which they were delighted. There is really a very creditable collection of shells, birds, reptiles, stones and curiousities…” (2). When she got older, Blannie was required to teach her younger brothers and sisters before they were old enough to attend school.

As the daughter of an Anglican minister, the Church and parish activities played an important part of Blannie’s life. In 1878, Blannie travelled to Norfolk Island to serve with the Melanesian Mission for a period of time. (3) She also assisted her father in his work and provided him with the (informal and unpaid) support of a ‘good and efficient “Deconess.”’ (4) In her later years, Blannie nursed her invalid mother devotedly, and she died at Ewelme Cottage on 9 December 1922.

Annette was born in 1857 in New Zealand, and the Anglican Church also played an important part in her life. Annette was a Sunday school teacher and also volunteered for the Melanesian Mission in 1880, during which she helped build a church on Norfolk Island. (5) On 8 April 1885, Annette married the Anglican priest, David Ruddock, who held various charges in Australia and England until 1903 when he was appointed the vicar of Wairoa in the Hawke's Bay. Annette and David had four daughters and two sons, both of whom sadly died while serving in the First World War. (6)