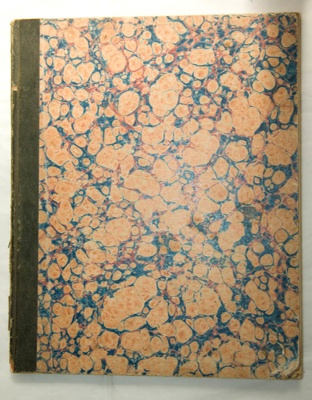 This soft covered exercise book belonged to Margaret Edith Lush who used it for her schooling lessons. On the inside of the cover Margaret Edith has written her name and “Shortland, September 2nd 1875.” On the first page there is a title reading “Bible Questions.” Margaret Edith’s father, Vicesimus Lush, was an Anglican priest so it is likely that much of Margaret Edith’s education consisted of religious education.

During the 19th century, educating girls was seen by many parents to be fruitless. This was because women were expected to marry, have children and run a household, all of which did not need formal education. (1) However, Margaret Edith’s parents stressed the importance of education and endeavoured to educate all of their children, including their four daughters. (2) In 1851, Margaret Edith's father opened a school at the All Saints Church in Howick, Auckland. According to his journals, the school roll included 15 girls and 12 boys and his wife helped by teaching the girls in the afternoons. Margaret Edith was largely taught by her father, mother, and older sister Blanche, but she also received lessons in German, French and art from other people in the community. Therefore, Margaret Edith and her sisters received a higher education than most other girls of their era.

Tragically, Margaret Edith died from Scarlet Fever on 22 April 1876 at the age of 16. While the death of a child was not unusual during the Victorian era, this does not mean that the loss was not felt greatly by parents and family members. In the Lush family archives held at Ewelme Cottage, there are a number of mementoes which serve as poignant reminders of the family’s tragic loss, including her schoolbooks, photographs of her gravestone, memorium cards, and inscriptions in books.