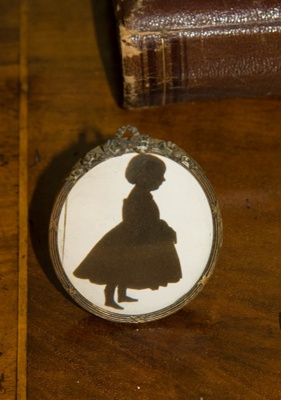 This framed photograph pictures the silhouette of one of the daughters of the Reverend Vicesimus and Blanche Lush. It is likely that little girl is either Anne or Margaret Edith Lush.

Margaret Edith was born in 1859 but tragically died from scarlet fever in 1876 at the age of 16. While the death of a child was not unusual during the Victorian era, this does not mean that the loss was not felt greatly by parents and family members. In his journal, Margaret Edith’s father wrote openly of his grief as he struggled to come to terms with the loss of his daughter, ‘”The child is not dead but sleepth” This has been the burden of my thought ever since 9 oclock when my dear dear dearest Edith Fell asleep.’ (1) In the Lush family archives held at Ewelme Cottage there are a number of mementoes which serve as poignant reminders of the family’s tragic loss, including photographs of her gravestone, mourning cards, and inscriptions in books.

Anne, known as Annette to her family, was born in 1857 and was the daughter of the Anglican priest, Vicesimus Lush, and his wife Blanche. Due to her father's calling, Annette's youth was greatly centred around the Anglican church and parish activities. When she was 18 years old, Annette received the highest marks in the Board of Theological Studies examination, a feat which she took great pride in for the rest of her life. Annette went on to devote herself to the Church and helping people, becoming a Sunday school teacher and volunteering for the Melanesia Mission during which she helped build a church on Norfolk Island. (2) On 8 April 1885, Annette married the Anglican priest, David Ruddock, who held various charges in Australia and England until 1903 when he was appointed the vicar of Wairoa in the Hawke's Bay. Annette and David had four daughters and two sons, who sadly died while serving in the First World War. (3)

The photograph is set in an oval, gilt frame which is decorated with grooves crossed by ribbons with a garland of ribbons at the top. On the reverse there is a metal leg which enables it to stand, and a ring for hanging is also attached. This silhouette is a modern reproduction of the original which is now missing.