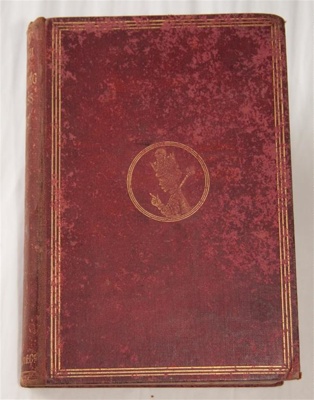 Book, 'Through the Looking Glass'

This book belonged to two sisters – Phoebe and Ruth Buckland. Through the Looking Glass was published in 1871 and is the sequel to Lewis Carroll’s famous novel, Alice in Wonderland. Books, like this one, were an important part of Victorian life in an era where there was no television, computers, or radio, and would have provided Phoebe and Ruth with hours of enjoyment.

Phoebe and Ruth were the daughters of Alfred Buckland, one of Auckland’s largest landowners and most successful agricultural businessmen. As there are few surviving letters, diaries or other documents about the Buckland family, little is known about the lives of the Buckland women and children. It is not known exactly where Phoebe went to school, but it is likely that she attended Remuera Public School, while Ruth, who was nine years younger, attended Mrs Young’s School for Girls on Symonds Street in Lower Glenside. In 1898, Ruth successfully passed the matriculation examination and gained entrance to the New Zealand University. (1) However, despite her academic aptitude, Ruth was unable to embark upon a career as women of this era were expected to dedicate themselves to the role of wife and mother. On 27 October 1920, Ruth married Arthur Waller and they had two children, Alison and Malcolm.

Phoebe never married and devoted herself to the care of Highwic, the Buckland family home. In her later years, she kept a number of pets including parrots and a large fierce dog named Dobson (shortened to Dobbie). She was described as a “fun person” and good company by those who knew her. (2)

For more information about the Buckland family and Highwic, which is cared for by Heritage New Zealand Pouhere Taonga, visit our website.