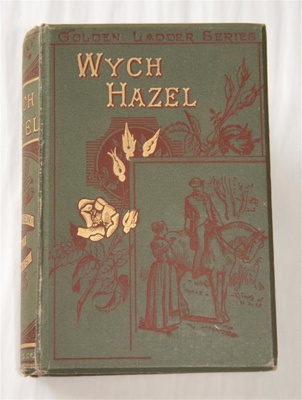 This book was awarded to twelve-year-old Ruth Buckland as a school prize. A label located on the inside cover reads: “Lower Glenside School, Auckland. Awarded to Ruth Buckland for first place in routine work throughout the year. Third class. E. Young, Principal. December 16th 1892.” The Lower Glenside School awards were even reported in the local newspaper: “Yesterday afternoon the presentation of prizes to the pupils of Mrs Young’s School for girls, Lower Glenside, Symonds Street, took place, there being a good attendance of parents and friends. The proceedings opened with a brief concert. The prizes were presented by the Rev. J. Bates…” (1)

Ruth was born in 1880 and was the daughter of Alfred Buckland, one of Auckland's largest landowners and most successful agricultural businessmen. She was one of 21 children and had thirteen sisters and seven brothers.

It seems that Ruth was an excellent student at school as she was gained a number of awards in subjects such as mathematics, classics, French, and ‘routine work.’ In 1898, Ruth successfully passed the matriculation examination and gained entrance to the New Zealand University. (2) In 1900, 805 students were enrolled in the numerous colleges of New Zealand University and 305 of these were women. (3) However, despite her academic aptitude, Ruth was unable to embark upon a career as women of this era were expected to dedicate to themselves to the role of wife and mother. On 27 October 1920, Ruth married Arthur Waller and they had two children, Alison and Malcolm.

For more information about the Buckland family and Highwic, which is cared for by Heritage New Zealand Pouhere Taonga, visit our website.