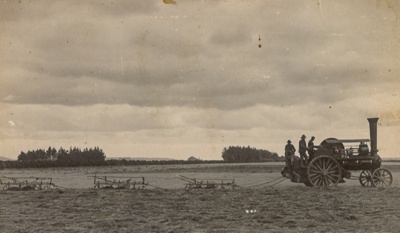 This is a photograph of Jones' traction engine ploughing a 250 acre paddock 2 miles south of Edendale. The contractor was the Australian New Zealand Land Company. The engine driver is Bill Brannigan, and the ploughman is Bill Forbes.

When this photo was given to the museum by Wallace Hall, the land was owned by A. L. Milne and R. Davers. In 2019, it is now owned by J. Hall and R. Davers.

A letter from the donor Wallace Hall written in 1989 reads: 'Mr Jones who occupied the farm now owned by John Chisholm, contracting for the N.Z. and Aust. Land Company on a 250 acre paddock opposite 'The Grange'. This paddock now comprises the farms of R. Davers, A.L. Milne, and half the farm of A.D. Milne. The Fowler traction engine was being fueled with Westport coal and was being driven as fast as the steam supply would allow in order to break up the couch-bound furrow with the three, double furrow, digger ploughs. (Note, before it was discovered that Edendale needed lime, the Land Company had such difficulty in establishing English pasture grasses that it even tried sowing couch (Agropyrum repens) in an attempt to grow a permanent grass).

The steerer on the engine was Bill Brannigan who lived on the right hand side of the road to Wyndham, opposite the end of the Coalpit Road (trees may be seen where the house once stood). The ploughman was Bill Forbes, a Land Company employee from the Homestead.

The Seaward Downs Road is behind the hedge in the background, and beyond the hedge from left to right may be seen (1) 'The Grange' house surrounded by trees; (2) 'The Grange' stable which was originally the Land Company's engine shed built in the late 1860s to house the steam ploughs; and (3) The trees at the 'Plantation', now the farm of E.M. Leggett.

Written in ink on the front lower right hand side is a yellow sticker:
'12'
On lower left hand corner indented into card:
'Wm Hall'
On the reverse is written along the top:
'John Hall' in a circle '2' then '18-8-89'
below that written in pen:
'Jone's Engine'
blow that in pencil:
'bought from Coy'
On upper right hand side in ink:
'Wallace R Hall'
No 1 R D'
'Edendale'
In the centre in black ink:
'Contractor for Australian NZ Land Co'
'250 acre paddock on Seaward Downs Rd.'
2 mls S of Edendale'
'land now occupied by Mr R Davers and Mr A L Milne'
On the lower left hand corner in blue ink:
'C'
Lower right added in pencil:
'WY.0000.453'