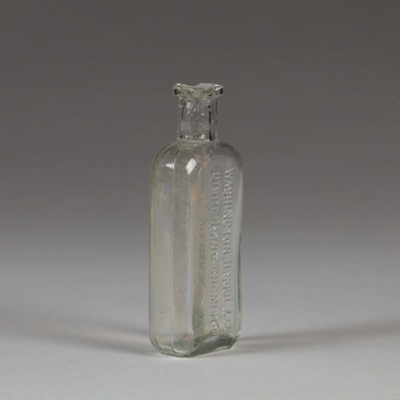 This is a glass rectangular shaped bottle with a narrow neck, embossed with the words, "Washington H. Soul & Co. Dispensing Chemists, Sydney".

Caleb Soul and his son Washington opened their first store at 177 Pitt Street, Sydney, in 1872, while Lewy Pattinson opened his first pharmacy in Balmain in 1886. The men became friends and never opened in direct opposition to one another.

Lewy Pattinson used to ride around the shops in the morning, arriving at head office about lunchtime, and in those days used to tether his horse outside. One day in the 1890s, on arriving at head office, he found the whole block had been boarded up. There had been an outbreak of bubonic plague in Sydney. Washington Soul, Caleb’s son, was waiting for him and said “Mr. Pattinson, I have taken the liberty of moving your head office to our head office at 160 Pitt Street, Sydney. Please continue to use it until you are allowed back into your own premises”.

Some years later Washington Soul approached his old friend, Lewy Pattinson, and asked if Pattinson & Co. would buy him out. Pattinson agreed and after discussion with his partners, Pattinson and Co. bought out Washington H. Soul and Co., effective from 1st April 1902.

Over 110 Years as a Listed Public Company – Washington H. Soul Pattinson and Company Limited is one of the few successful public companies that has been managed by the same family from the outset – and therein lies the key to its strength.

It is part of a large collection of chemist's equipment which came from the old Wyndham pharmacy in Balaclava Street. This was the United Friendly Society Dispensary, known as the UFS.