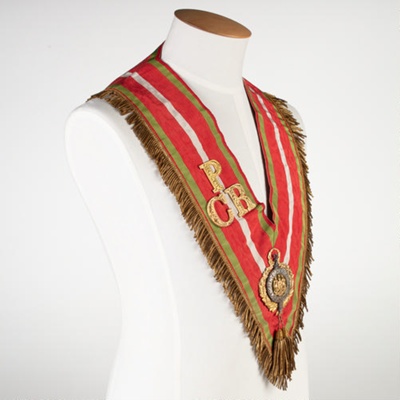 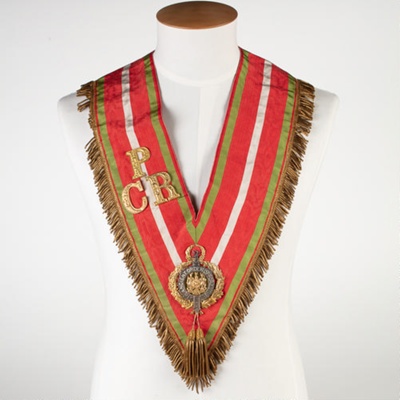 This is a collar from the Wyndham division of the Ancient Order of Foresters.

The Ancient Order of Foresters, with its motto Unity, Benevolence and Concord, began in England in the mid-eighteenth century. By the time the first New Zealand branch opened in 1852 it was an established friendly society, providing sickness and death benefits to its members and having a particular concern for widows and orphans. From 1909 their activities were governed by the Friendly Societies Act, which required the compulsory registration of all such societies.

Born in Yorkshire in 1817, George Tutill was the son of an illiterate miller. He began his working life as a fairground showman and had an embellished caravan with ornate designs. This caught the eye of the trade union and friendly societies who asked him to design banners for them.

George’s company went on to be the largest manufacturer of trade union banners in the world. He patented a technology for keeping the material flexible and durable in the wet and in 1881 he installed the world’s largest Jacquard Loom in his City Street factory in London.

George manufactured sashes, emblems, aprons and collars for all sorts of societies and even made false beards for the Ancient Order of Druids. George was a meticulous book-keeper and kept photographs of every banner he made, however, all his records were destroyed in the Blitz during World War Two.

Just out of interest, do you know what the initials P, C, R stand for on the sash?