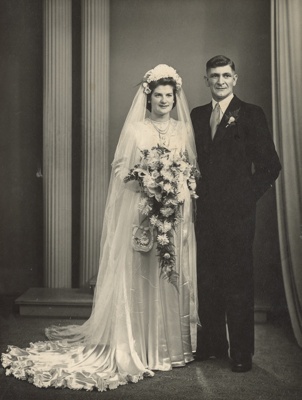 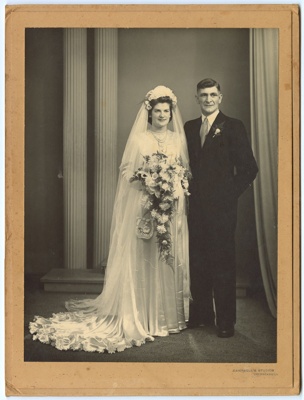 This is the wedding photograph of Jack (John) and Betty (Elizabeth nee Wright) Geary.

Jack shifted to Wyndham in Easter 1948 to met up with a Prisoner of War buddy. With a job lined up in Christchurch, Jack got a job helping to repair the Wyndham boarding house kitchen, and so stayed longer than intended.

Betty's father was a blacksmith. One afternoon, Jack and his friends went to pick up a plough piece from the blacksmith shop and they ended up inviting Mr Wright to watch their rugby match which took place later that day. After the game, Mr Wright invited Jack and his mates home for tea. Jack helped Betty with the dishes and invited her to go to a dance at Mokoreta. Jack loved dancing, but Betty wasn't much good. Jack taught Betty to dance, but said 'she was like a sack of chaff to take around the floor'.

Despite Betty's father tagging along to the dance, the romance blossomed and the pair were married on April 22, 1949.

During their engagement, Jack built Betty a house and when they were married they shifted in. The furniture was made specially at Poole's Joinery in Invercargill and 70 years later, Betty still has some of the pieces.

Betty and Jack shared 53 years together and having spoken to Betty, it is clear that throughout those years they loved each other deeply.

© Betty Geary, with permission for Wyndham and District Historical Museum to use.

© Betty Geary, with permission for Wyndham and District Historical Museum to use.