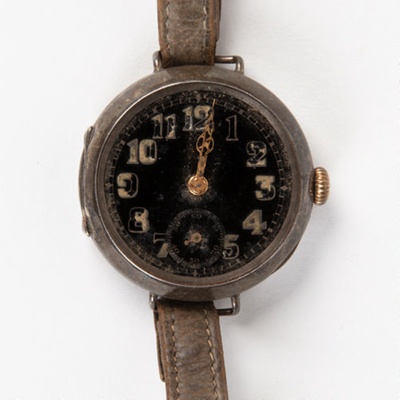 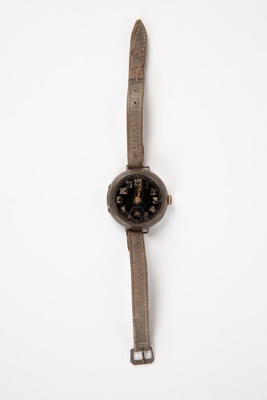 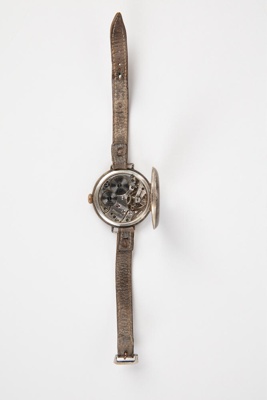 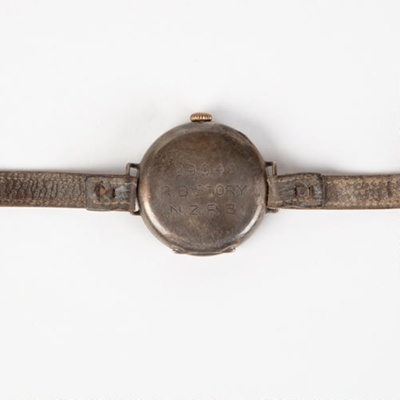 This sterling silver wrist watch belonged to Robert Douglas Story (known as Doug) of Venlaw Station, Mimihau. We believe it was an item of military issue during his service with the Royal New Zealand Rifle Brigade. There are marks inside the case back for Birmingham 1915, along with the importer's mark A.G.R. (for maker Arthur George Rendell), and the War Department stamp of the ‘pheon’ or broad arrow, the sign of military property.

Generally, men didn't wear wristwatches before WWI, but it became clear that pocket watches were impractical to use on horseback, or in the cramped conditions of the trenches. In addition, the Great War was the first time in British Army history that battles were conducted by officers in remote field headquarters where they could not see the front line. Army units deployed across vast fields of battle had difficulty communicating, and so for the first time, the execution of orders and coordination of manoeuvres and attacks by careful timing became vital. Thus the need for a wrist watch.

However, two new design features were also necessary. Striking a match was dangerous because it might be seen by an enemy sniper, so luminous paint was added for night time activities. The small seconds hand was also important - in the noise of battle, it indicated that the watch hadn't stopped and was working correctly.

The paint used on the dials and numerals of luminous watches was powered by radium salts, which glowed strongly all the time and didn't rely on exposure to sunlight to charge up the luminous effect. This paint had a lifespan of three or four years.

However, the radium in the paint is radioactive, and caused serious health problems for the 'watch girls' who painted the dials. Dipping their fine brushes into the paint, they would frequently 'lip' the brush, putting in in their mouths to draw the bristles to a point. Many girls went on to suffer serious radiation poisoning, and even death.

Our watch has been scientifically tested by a radiation expert. Its paintwork is intact, and presents no danger.