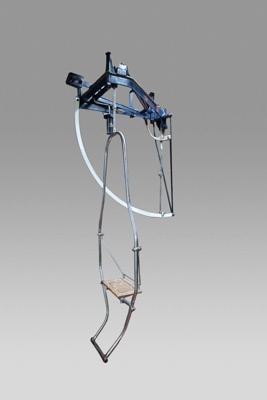 This is a set of jockey scales which were once used at the Wyndham Racecourse. Scales are used in the galloping industry to weigh jockeys before and after a race. The reason for this is to see that the jockey is carrying the correct weight, which has been set down by the handicapper at the time that the race fields have been drawn up.

When a horse is accepted into a race he is given a weight to carry eg. 54 kg, and the trainer then engages a jockey. If the jockey they employ weighs significantly less than the given weight, with his saddle etc, then the rider will have to carry dead weight. Dead weight is small lead discs carried in the saddle pad. If the jockey is significantly over the nominated weight, then he will have to waste. This is a cruel process as the jockey must then limit his food intake, run with an excess amount of clothing on, go in a sweat box or hit the gym to reduce body weight. This consideration of weight is why there are significantly more female riders today, as their body frames are generally smaller and lighter..

On race day, the Clerk of the Scales weighs each jockey prior to the start of the race, and after the race jockeys finishing in the top 4 placings will be weighed again. After the jockey’s weight is confirmed to be correct then placings will be awarded. On the odd occasion a jockey may weigh in light after a race, the Clerk of the Scales will inform the judiciary. An inquiry will be held, the horse will lose its placing, and the jockey will be fined or disqualified from riding for a given period of time. Unfortunately for those who had a wager on that horse, their money is lost to them. If the jockey weighs in overweight after a race, the horse is deemed not to have any advantage so the jockey will be fined, but the horse remains in the placing in which it finished.

Scales such as these have to be certified every six months to check that they are true and correct. This is done by New Zealand Galloping authorities. The scales also have to be checked 24 hours prior to race day to guarantee they are still running true. Each racecourse would have had their own set of scales, but today's scales are transportable.