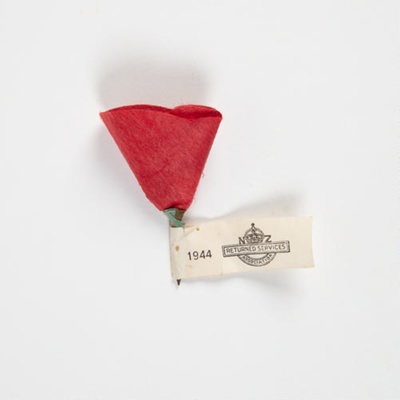 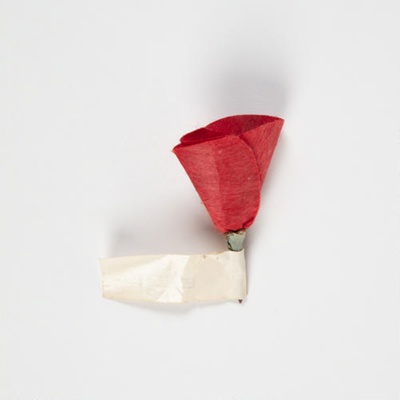 This is a New Zealand Returned Services Association Poppy Day Appeal Anzac Poppy from 1944. The Anzac Poppy is the most powerful symbol relating to the impact of war in New Zealand. Poppies are sold annually in New Zealand the Friday before Anzac Day, 25 April. This is known as the Poppy Day appeal, from which funds raised go towards supporting the welfare of returned service personnel and their families. Anzac Day is the anniversary of the landing of the Australian and New Zealand Army Corps (ANZAC) at Gallipoli in 1915, and is observed in New Zealand and Australia as a day of commemoration for those who died in the service of their country and to honour returned service personnel.

The poppy was one of the first flowers to grow in the mud of the World War One battlefields in Flanders, Belgium. Canadian Lieutenant Colonel John McCrae famously observed this in his poem 'In Flanders Fields' ('In Flanders fields the poppies blow, Between the crosses row on row ...'). After his death, in 1918, the poppy became an international symbol of regeneration and growth in a landscape of blood and destruction.

In 1921, the New Zealand Returned Soldiers' Association (now the Returned Services' Association) placed an order for thousands of silk poppies made by the French Children's League. The first Poppy Day appeal was going to take place around Armistice Day in November 1921, but the ship carrying the poppies from France arrived in New Zealand too late, so the RSA decided to wait until Anzac Day 1922. This first Poppy Day was a huge success, with some of the profits being sent to the French Children's League to help relieve suffering in the war-ravaged areas of northern France. Today, Poppy Day is one of the oldest nationwide appeals in New Zealand.

The RSA began producing its own poppies in 1931, with disabled former servicemen in Auckland and Christchurch making them. This is one such Poppy which was likely made in Christchurch. The current 'opened' or 'flat' paper design was adopted in 1978.