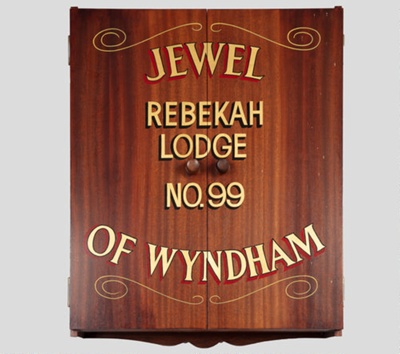 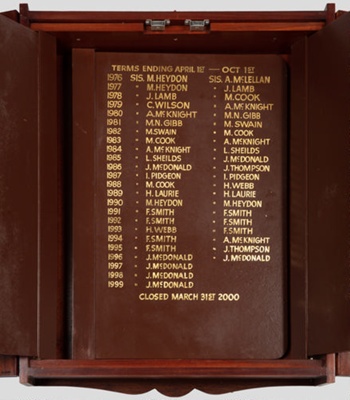 Board, Rebekah Lodge Past Grands

This honours board was made for the Rebekah Lodge No 99, Jewel of Wyndham. Inside the closed doors are three leaves, with the names of those Sisters who were Past Grands recorded. These start from 1952 and run until 1999. Underneath is a final entry, 'Closed March 31st 2000'.

The Rebekah Lodges were the Women’s Associate Lodges of the Independent Order of Odd Fellows (IOOF). The lodges had a twofothiod aim: to provide an environment of friendship and social contact which fostered a sense of belonging and caring; and to heighten social awareness, encouraging members to be active within their community.

The first IOOF in New Zealand was formed in Dunedin in 1861, and later in the decade the wives of its senior members were encouraged to join the Rebekah Degree of the Order, founded in the USA in 1851. The Rebekahs (as members were known) met regularly to provide support for needy families of members, and for abandoned wives within their community. They also worked alongside philanthropic bodies such as the Dunedin Female Refuge in providing much needed service in the rapidly growing town.

The values and ideals represented by Biblical women, such as Rebekah for her kindness and hospitality, and Ruth for her fortitude, affection and piety offered important inspiration within the Rebekah activities. The Rebekahs continued to adhere to the IOOF motto of 'Friendship, Love, Truth, Where people come first'.

In 1992 there were 58 Rebekah Lodges in New Zealand, with a membership of 2089; some Rebekahs were the wives and daughters of IOOF members, but many others did not have this connection. Over the next two decades however, interest in the Rebekah Lodges, as well as in the Independent Order of Odd Fellows slowly waned. By 2015 all IOOF lodges in New Zealand had closed.