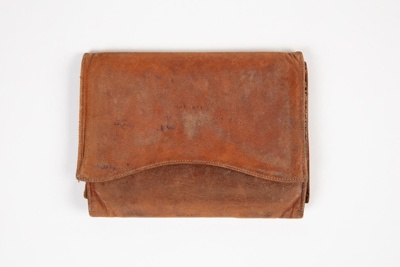 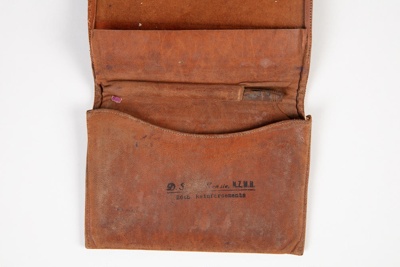 This is a small pocket sized leather writing case which Donald Sutherland McKenzie used during World War One. It is stamped on the front and inside, 'D S McKenzie N.Z.M.R 26th Reinforcements', and has a compartment for a small notebook and a pencil. Interestingly, the pencil compartment houses a small purple coloured pencil with a metal lid which appears to have been made out of a tin can. Perhaps Don made this to keep the pencil protected in the often wet and muddy trenches.

Born at Fortrose in 1892 to Donald and Margaret McKenzie, Don grew up on the family farm 'Rosemount' at Glenham.

In 1917, Don enlisted to serve in World War One. At the time, he was working on the family farm at Glenham, and listed his father as next kin. Don served with the Otago Mounted Rifles in the 26th reinforcements.

He returned in 1918, and continued to work on the family farm. When his father passed away, Donald and his brother Kenneth took over the farm, with his sister Alice taking care of the household.

Stamped in black ink on both front and inside: 'D S McKenzie N.Z.M.R 26th Reinforcements'.