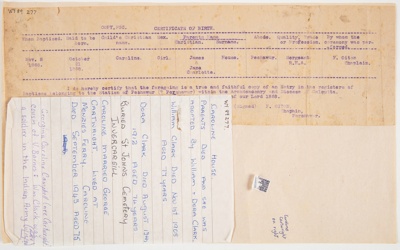 This is a copy of the birth certificate of Caroline House Cartwright née Clark. Caroline was born on 21 October 1868 to James and Jane Charlotte House in Peshawar, India (now Pakistan). The couple christened her with the name Caroline House on 8 November 1868. At the time, James was serving as a Sergeant with the British Royal Horse Artillery in India.

In 1869, Caroline's mother died at the age of 33. This left James with four children, including baby Caroline. Shortly after the death of her mother, Caroline was adopted by a fellow soldier, William Clark and his wife Dora. We cannot find any formal records of the adoption, however, Caroline took their surname becoming Caroline House Clark.

In 1872, having served 21 years as a farrier with the British Royal Horse Artillery, William retired at the age of 40. The family moved to Edendale where William worked as a farrier on the Edendale Estate, and then later ran his own blacksmith business on Morton Street. In 1893, Caroline married George Cartwright, and the couple lived at Menzies Ferry. They had five children, William Henry, Thomas George, Albert, Dorothy Sarah and Leonard.

Caroline died on 20 September 1943, and is buried in the Invercargill Eastern Cemetery.