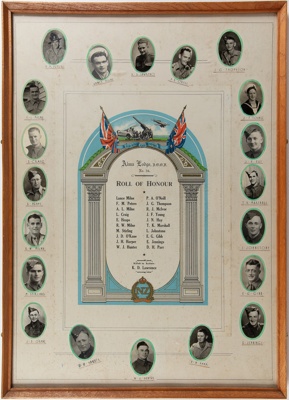 This is the Odd Fellows Alma Lodge Wyndham Roll of Honour for members who served during World War Two.

The International Order of Odd Fellows Alma Lodge formed in Wyndham in 1882. The Alma Lodge Wyndham followed the principles of the International Order, these being friendship, love and truth. In a pre-social welfare New Zealand, membership direct prpovided sickness and funeral assistance to families of members, along with medical and insurance benefits. In 1921 the Alma Lodge and the Foresters of Wyndham formed a Friendly Society and opened a United Friendly Society Dispensary. A committee of members from the societies administered the dispensary and funds were contributed by the lodge members and raised by other means. Medicine and other pharmaceuticals approved by the committee of management were supplied to members of the institutions, their dependents, and juveniles under 18 years of age whose parents did not belong to any Friendly Society. Fifty years later, the committee members still operated by the same criteria.

In the 1990s the United Dispensary was sold with the proceeds put into the John Beange Medical Centre. After the sale the Lodge continued to support the community via a firewood raffle at the Edendale Crank-Up. The proceeds from the raffle, subsidised by the local Lodge and the Grand Lodge, assisted the Community Rest Home for Elderly Citizens and the John Beange Medical Centre.

The Lodge always had a strong membership, and this remained the case until 2013 when 18-25 men still met monthly. Unfortunately, at this time, lodges throughout New Zealand were being closed by the Grand Lodge. Shortly after shifting to new premises in Edendale, the Alma Lodge Wyndham folded in 2013.