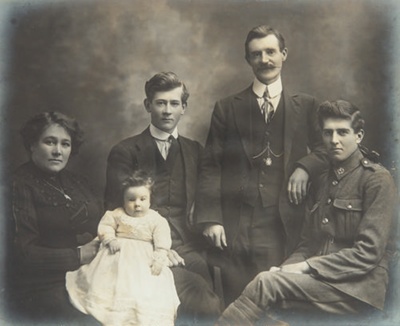 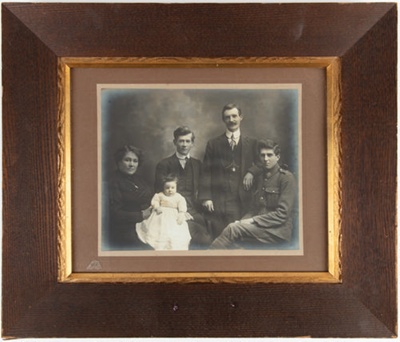 This is a family portrait photograph of the Williams family of Wyndham shortly before Hector Williams left to serve in the First World War.

Both originally from London, England, Mary Louisa Goble and Francis Williams married at North East Valley, Dunedin on May 23 1892. The couple had five children together, of which only one out lived them.

Their first child Eveline Mary was born in 1892 and died in February 1894 at only 16-months old. Eveline is buried in Dunedin's Northern Cemetery.

Hector Edward Goble was born in 1895. A keen athlete, Hector worked as a carpenter at Wyndham. On August 14, 1914, Hector enlisted for World War One. He was killed at the Battle of the Somme in France on September 15, 1916. He is buried in the Flatiron Copse Cemetery, Mametz.

In 1897, the couple had Arthur Francis Goble. Arthur worked as a dentist in Wyndham prior to also enlisting for the First World War in 1917. Arthur returned from this conflict only to to be killed in a motorcycle accident near the Invercargill Eastern Cemetery while travelling home to Wyndham on September 13, 1919 - nearly three years to the day after Hector's death. The coroners inquest concluded that Arthur hit a pothole causing his 7h.p. Excelsior bike to capsize and land on top of him. This resulted in a head injury. Surgery was performed at the Invercargill hospital to relieve pressure from Arthur's brain, however it was too late and he died not long after. Arthur is buried in the Wyndham Cemetery Block IV Plot 15.

In 1911, Francis and Louisa had their fourth child, Clarence Graham King who died aged 1-year and 11-months. Clarence is buried in the Wyndham Cemetery Block IV Plot 15.

In 1914, Francis and Louisa had their final child, a boy named Francis James. Frankie Jnr took over the family tailor business in Wyndham. He served during World War Two as a Corporal and returned to Wyndham where he later worked in the telephone exchange. Frank married Effie Elliott and the couple had two children. Frank died in 1999, aged 85-years. He is buried in the Wyndham Cemetery with his two brothers and his father in Block IV Plot 15.

Louisa died in 1936 and is buried in the Dunedin Northern Cemetery with their daughter Eveline and her mother Emma. These three, along with Hector and Frank Jnr's son Graham are remember on the Wyndham Family plot.