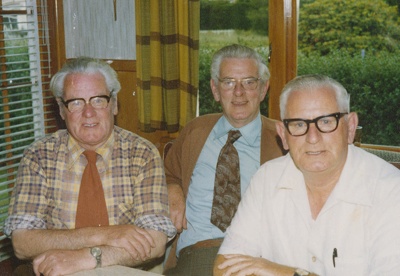 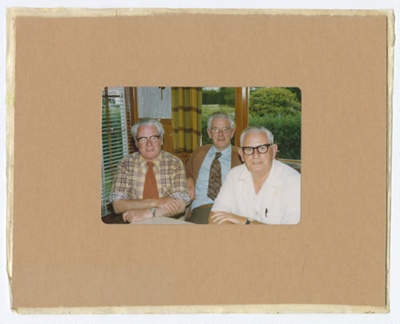 This is a snapshot of Henry, Jack and Father Les Heath.

All three men were sons of Mr & Mrs Harry Heath. Father Leslie Heath joined the Marist Fathers and spent most of his priestly life in Fiji.

Henry owned a Dairy in Wyndham, and as he was a keen angler displayed various fishing trophies mounted on the wall in the shop. He played a major role in establishing the Wyndham Angling Club's world-wide reputation through his hospitality to overseas visitors, and in guiding them as they fished the local rivers. He was awarded Life membership of the Club in 1979, and about 200 people gathered in the Oddfellows Hall for the occasion. Mr Heath was presented with a Jubilee Year Queen's Service Medal in recognition of his involvement in the community.

Jack Heath served in the Second World War. He became Manager of the Wyndham Branch of the United Trading Company in 1946 soon after he returned from the War. He retired as Manager in 1982 after 50 years with the same firm.