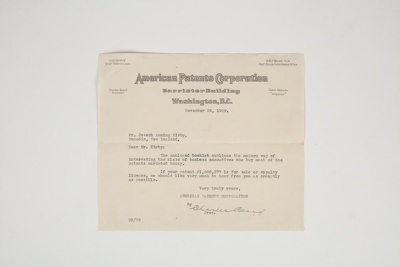 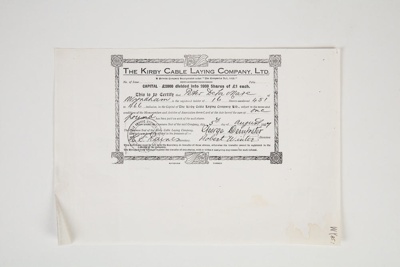 This is a box of archives pertaining to the Kirby Cable Laying Company Ltd.

In 1926 Joseph Kirby invented a machine to facilitate the laying of underground cables. A syndicate of nine members, comprising mainly Wyndham businessmen was formed, with Mr James Robertson as Secretary and Charles E Davey to attend to the legal requirements. Amongst those who supplied parts and assisted in the construction of the machine were Ernest Lister Garage proprietor, with J C Allison and Alex McMillan both blacksmiths. The machine was designed to lay armoured or lead covered cable underground to a depth easily adjustable between 6 and 23 inches. The machine was drawn by a traction engine which played out the cable from a winder as well as supplying the haulage. The machine accomplished in one hour the work that would have taken 100 man hours to do manually.

By mid 1926 the reputation of the Cable Layer has reached Canada; and in November that year it was sold to the Post & Telegraph office, NZ for about £200.

Negotiations were under way with Canada and Australia for the purchase of machines. However, for some unknown reason the patent rights were not completed and some of the overseas visitors who inspected Mr Kirby's machine then went away and manufactured their own copies.

The original machine is believed to have been left in the yard of the Southland County Council, were it lay abandoned for many years.

Copy of a Share Application form for The Kirby Cable Laying Company, Ltd