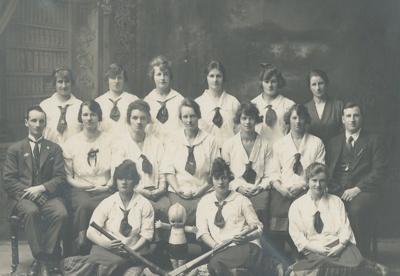 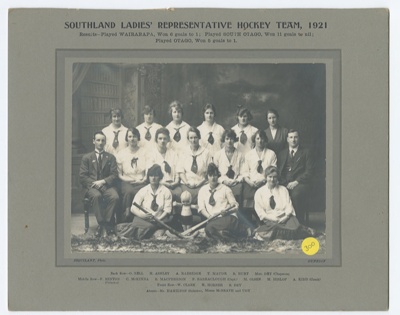 The team is named as"

Of this team several were members of the Wyndham Ladies Hockey Team, including Misses McBeath, Udy, F Barraclough and A Rabbidge.

Note the team had a 'Kewpie Doll' mascot.

Front of Photograph in bold typing:
'The Southland Ladies' Representative Hockey Team, 1921'
Results - Played WAIRARAPA, Won 6 goals to 1; Played SOUTH OTAGO, Won 11 goals to nil; Played OTAGO, won 5 goals to 1.
The team is below the photo typed on card as per public description
On the lower right hand side of photo is yellow sticker with
'300'
Below the photograph is the makers mark:
'ESQUILANT, Photo. DUNEDIN'
On the upper left corner in ink:
'WY 96 63 n'
'T 16 A'
On the lower left in blue handwriting:
'Macpherson'
Added in pencil on the right:
'WY.1996.63.24'