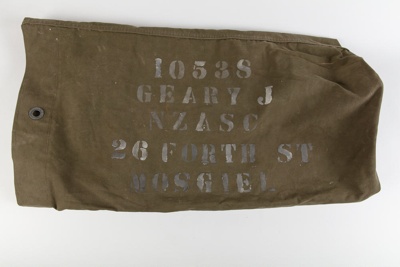 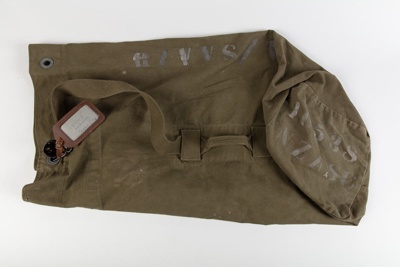 This World War Two New Zealand military issue kit bag belonged to Jack (John) Geary, who was originally from Mosgiel but came to Wyndham when he married local girl Betty Wright. Jack served with the 2nd Divisional Supply Column driving trucks in Greece. He was on Crete in May 1941, and missed the evacuation of the island. Jack spent six months evading capture, however, in February 1942 he was taken as a prisoner of war. The prisoners were first taken by boat from Crete to Greece, then loaded into cattle trucks and taken to Lansdorf Prison Camp on the border of Germany and Poland.

While in camp, Jack was put to work in coal mines. He didn't like it very much and the second time down, he stole a spanner. Jack used this to get the bars off the barrack window and four prisoners escaped. They were caught a few hundreds metres up the railway line. Jack continued to work in the mines and one of which collapsed when he was down the shaft. He also worked as a carpenter in town, and the German guard who drove him there and back turned a blind eye to the 4 litres of alcohol that Jack would frequently took back to camp with him.

Jack discovered that his younger brother, Frank, was in a camp about 10 miles away, and pair hatched a plan to be together. Meeting at the shared prison camp doctors, it was agreed that Frank would state he was the older brother and request a transfer for Jack, as Beuthen camp which better than Lamsdorf. The plan worked and Jack was transferred. Here too, Jack worked in mines until he bribed a doctor with gum and chocolate. Diagnosed with a pleuritic rib in the lower left lung, he was no longer able to work down the mine.

When the Russians, got close the prisoners were moved up to west Germany. On this journey, Jack worked on local farms which were being run by women. He was working in a small village down near Munich when the Americans marched through, and liberated them. By this time, he weighed 9 stone, compared to the 14 stone at which he was when he went in.

After the war, Jack still used his kit bag, his wife Betty remarked that 'Jack took that everywhere with him'.