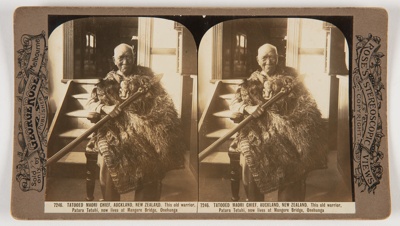 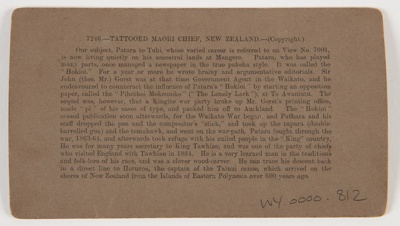 The museum has a stereoscope in a box named 'Souvenir Of the New Zealand Exhibition 1906, Rose's World-Famous Stereoscopic Views, Gems of New Zealand Scenery' in the Kapai Series, as supplied to the NZ Government Tourist Dept. It is possible that this stereograph was purchased alongside this stereoscope. (see WY.0000.808)

On the reverse of the stereograph it reads: 'TATTOOED MAORI CHIEF, NEW ZEALAND.- Our subject, Patara te Tuhi, whose varied career is referred to on View No.70001, is now living quietly on his ancestral lands at Mangere. Patara, who has played many parts, once managed a newspaper in the true pakeha style. It was called the "Hokioi." For a year or more he wrote brainy and argumentative editorials. Sir John (then Mr.) Gorst was at that time Government Agent in the Waikato, and he endeavoured to counteract the influence of Patara's "Hokioi" by starting an opposition paper, called the "Pihoihoi Mokemoke" ("The Lonely Lark"), at Te Awamutu. The sequel was, however, that a Kingite war party broke up Mr Gort's printing office, made "pi" of his cases of type, and packed him off to Auckland. The "Hokioi" ceased publication soon afterwards, for the Waikato War began, and Pathara and his staff dropped the pen and the compositor's "stick', and took up the tupara (double-barrelled gun) and the tomohawk, and went onto the warpath. Patara fought through the war, 1863-64, and afterwards took refuge with his exiled people in the "King" country. He was for many years secretary to King Tawhiao, and was one of the party of chiefs who visited England with Tawhiao, in 1884. He is a very learned man in the traditions and folk-lore of his race, and was a clever wood-carver. He can trace his descent back in a direct line to Hoturoa, the captain of the Tainui canoe, which arrived on the shores of New Zealand from the Islands of Eastern Polynesia over 600 years ago.'

Embossed on mount: 'Roses Stereoscopic Views''Copyright' 'Sold only by George Rose, Melbourne, Publisher'Caption as in DescriptionReverse in pencil lower right, 'WY.0000.812'Reverse, printed: '7246.- TATTOOED MAORI CHIEF, NEW ZEALAND' and a reference to the subject as in Public Description.