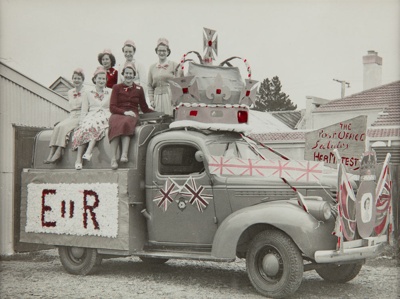 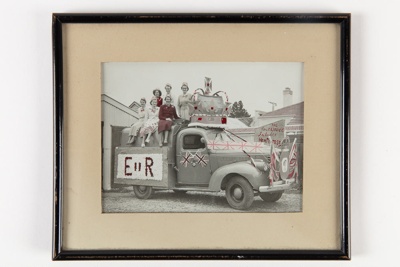 This is a framed and glazed hand tinted photograph taken on Coronation Day of Queen Elizabeth II in 1952. Here the Post Office Exchange Staff are shown in the parade of floats which took place in Wyndham.

When Queen Elizabeth II was crowned on the 2nd of June 1953, Wyndham's celebrations began with a morning civic service in the Town Hall. Mr Harry R. Stirling presided and Mr R.M.Hutton-Potts of Invercargill spoke of the significance of the Coronation Ceremony and the Queen's duties. A combined choir sang hymns with Betty Geary as the pianist and Rev G.H. Reid read the Bible passages and led the prayers.

The afternoon programme began with a parade from the intersection of Balaclava and Inkerman Streets. The Pipe Band led the parade to the school, where assembled floats depicted topics of the times, such as 'Financing the Country Library Service', 'To move to form a Fire Brigade' and 'Efforts to get a licensed hotel for the town'. Also humorously played out was a 'knighting' of Harry Stirling, the Town Clerk, as Sir Henry Roderick Stirling K.S.S. and A.R. (Knight of the Sanitary Services and Ash Removal). Jack Geary who had recently holed-in-one at golf, was Lord Geary L.H.O. C.N. (Lord Hole In One and Commander of the Nineteenth) and Sir Douglas Norman Alister McPherson was P.L.R. (Publisher of the Local Rag). Their carriage was the horse-drawn ash cart driven by William Trethaway.

The Coronation Ball was held in the evening - "One of the most spectacular occasions in the social life of the Wyndham District in recent years".

Celebrations continued when the Bible Class members presented a pageant on the following Sunday night, at the Wyndham Presbyterian Church, where they presented the meaning of the Coronation. They had effectively produced copies of the Crown, the Sword, the Scepter, the Orb, the Ampulla and other regalia, all of which gave realistic ideas of the originals.