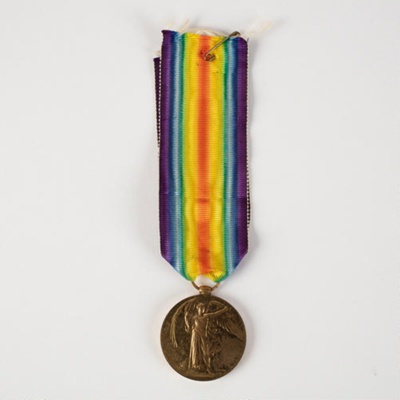 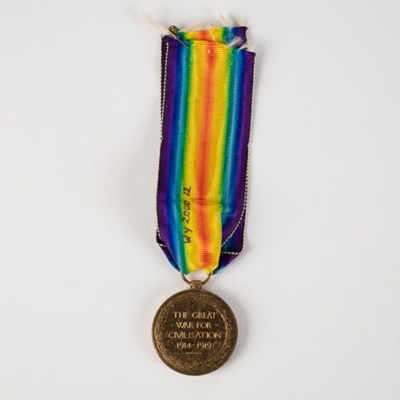 This Victory Medal belonged to Robert Douglas Story (1895-1964) 29948 RFLM N.Z. Army. Robert hailed from Mimihau and prior to being in the Army he was a shepherd. He was affected by German gas in Messines in World War 1. Returning from the war he continued farming until his death.

The Victory Medal was issued to all those who had already qualified for the 1914 Star or the 1914-15 Star, and to most persons who had already qualified for the British War Medal. The Victory Medal was awarded to all New Zealand troops serving overseas, except for those who arrived in Samoa after 30 August 1914 and those serving in Great Britain only.

The Victory Medal is distinguished by its unique ‘double rainbow' ribbon. Approximately 6 million of these medals were issued to military personnel from the British Empire.

The obverse of the medal depicts the standing figure of Victory holding a palm branch in her right hand and stretching out her left hand. On the reverse of the medal is a laurel wreath containing a four-line inscription: "THE GREAT WAR FOR CIVILISATION 1914-1919". The dates are '1914-1919' to include post-war intervention by the Allied nations in the Russian Civil War.

This medal is sometimes referred to as the "Allied War Medal", because the same basic design and the double rainbow ribbon were adopted by 13 other Allied nations (though the United States of America alone issued their medal with campaign clasps). The Union of South Africa produced a version of the medal with a reverse text in English and Dutch (not Afrikaans, as is often stated).