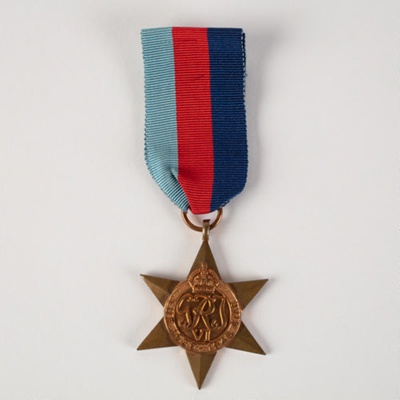 This 1939-1945 Star was awarded to Private Thomas Templeton. Before going to war Thomas was a farm worker. He worked for the Wyndham Town Board as a day man, keeping the streets clean and tidy and he also prepared graves for interment.

The 1939-1945 Star is the first in a series of eight campaign stars instituted in 1945 to recognise service in the Second World War.

This bronze six-pointed star has a circular centre with the GRI/VI monogram, surmounted by the Royal crown, and inscribed 'The 1939-1945 Star'. It was usually awarded for six months (180 days) service in specified operational areas.

The 1939-1945 Star was issued unengraved to New Zealand service persons, as were other Second World War campaign medals awarded for service for New Zealand. The same no engraving policy was applied by other British Commonwealth countries, except for Australia and South Africa.