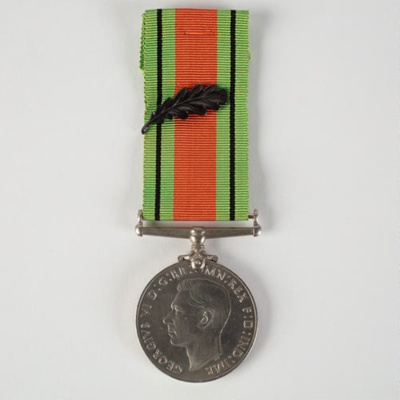 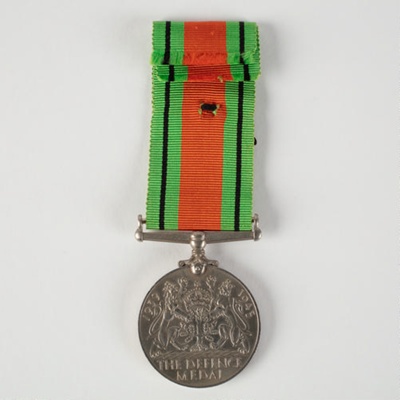 This Defence Medal was presented to Private Thomas Templeton 18816, N.Z. Army, for services during World War Two. Before going to war Thomas Templeton was a civilian\farm worker. He worked for the Wyndham Town Board as a day man, keeping the streets clean and tidy and he also prepared graves for interment.

About the Defence Medal:

The Defence Medal was awarded to British military and civilian personnel for a range of service in the United Kingdom, and to British, British Commonwealth and British Colonial personnel who served outside their home countries in a non-operational area or in an area subject to threat such as air attack.

The centre of the ribbon is flamed-coloured, and the edges are green, symbolising enemy attacks on Great Britain. Two black stripes represent the blackout in Great Britain.

On the ribbon is an oak leaf which means Thomas Templeton was mentioned in dispatches, meaning his name appears in an official report written by a superior officer to high command, in which his gallant\meritorious actions are described.