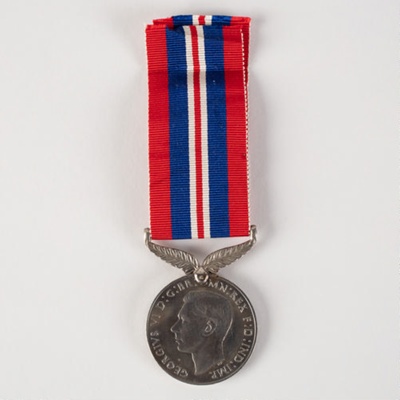 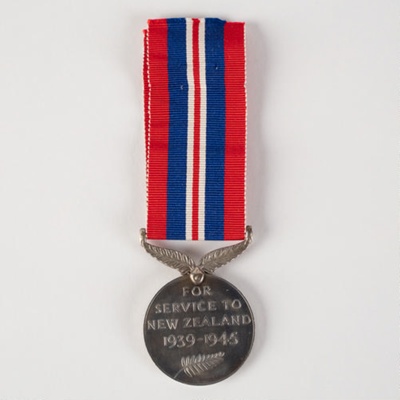 This War Medal for New Zealand Service was presented to Harold Benjamin Genge 17359 on his return from World War Two.

Before enlisting in the army, Harold was a farmer and a lignite quarryman. On his return from war Harold farmed on Coalpit Road where he remained for all his working life. The Genge family had nine children including triplets Harold, Ted and Herbie, and twin girls.

The NZWSM was approved in 1946, and was awarded to members of the New Zealand armed forces, the National Military Reserve and the Home Guard, as well as the New Zealand Merchant Navy and Naval Auxiliary Patrol Service. It was awarded in addition to, and worn immediately after, the standard Commonwealth campaign awards for World War Two. The NZWSM was awarded for 28 days' full time aggregated service or six months' part-time aggregated service between 3 September 1939 and 2 September 1945. Some 238,000 medals were issued.

The reverse and mount were designed by the historian and typographer Dr John Beaglehole and the wood engraver E Mervyn Taylor. It was the first distinctively ‘New Zealand' campaign medal, which was emphasised by the use of the fern leaf motif on the reverse and suspension, and the national colours of black and white in the ribbon. The use of the fern leaf motif was made at the request of the Labour party cabinet who wanted 'a fern leaf like on the All Blacks' jersey'.

The ribbon on Harold's medal should be black and white - it is on a red, white and blue grosgrain ribbon