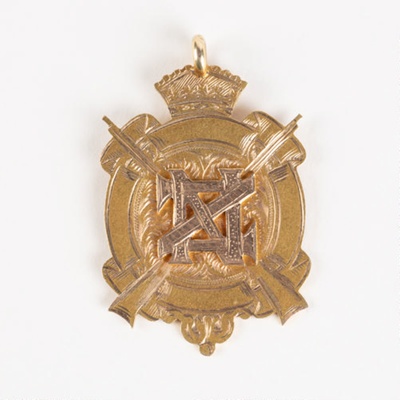 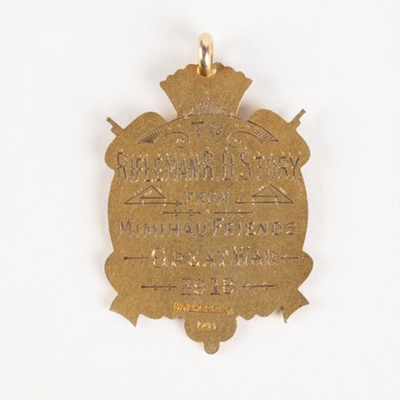 This is a gold coloured medal in the shape of a shield with two crossed rifles. It was presented to Robert Douglas Story (Doug), of Venlaw Station, upon his return from World War One in 1918.

In 1918, Robert Story Snr died and Doug assumed control of the Station upon his return. Having been gassed at the Battle of Messines, Doug experienced health difficulties which at times restricted his capabilities to run Venlaw. Fortunately, the family had always collectively owned the property with the oldest son in charge, and this meant that three of Doug’s siblings were around to help him

Colin and Nonny (Noel) cared for the animals, and during periods of labour shortage, did most of the mustering. Colin also did the book keeping for the business, and Mary feed the workers.

Following Doug’s death in 1950, Colin took over the management role. In the 1970s, Colin’s sons, Bruce and Tim, took over the property, however, their Aunt Nonny lived to be 97 and maintained a keen interest in the business.

Doug never married. He is buried in the Wyndham Cemetery with his sisters, Nonny and Mary.

On reverse side of medal;
'to Rifleman
R. D. Story
from Mimihau Friends
Great War 1918'