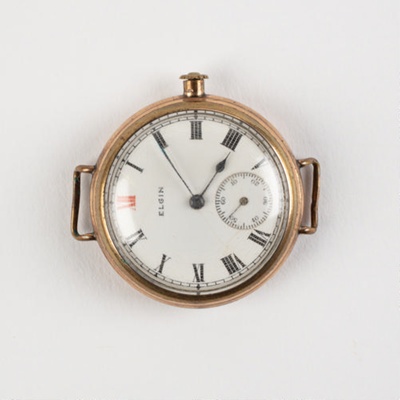 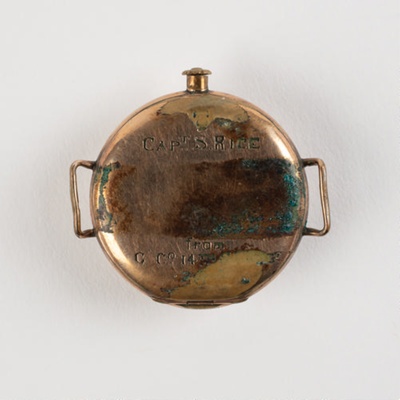 This watch was given to Mayor Stanley Rice 16/1023 by G Company 14th South Otago Regiment and Timaru City Rifles.

Previously in the South Otago G Company of the Otago Territorials, at the outbreak of WWI Stanley lived in Wyndham with his wife and three children and was a partner in a merchant business. He enlisted at Milton and disembarked from New Zealand on 18 September 1915. Rather than joining the Otago Regiment, he took charge of the Second Māori Contingent. He subsequently received promotion, and was transferred back to the Otago Battalion.

In 1916 Stanley was badly wounded at the Somme. Shortly after going over the parapet he was shot in the right forearm. Continuing on, he was then shot in the upper right leg. Still determined to reach the German trenches, Stanley kept going and was shot a third time. Luckily, this bullet hit his revolver, which proceeded to shatter and scatter pieces into his right arm, chest and stomach. Without the revolver, this shot would have been fatal. Still Stanley continued on. The fourth shot hit Stanley in the lower left leg, halfway between the ankle and knee and he went down.

Having made it to a shell hole, Stanley passed out from blood loss and seven hours later stretcher bearers found him. He then lay outside an aid post for five hours under shrapnel fire, and was eventually carried through communication trenches where, after 18 hours, he reached the field hospital.

Stanley’s lower left leg had a severe compound fracture and a nasty wound. Eventually, his leg was amputated and he was fitted with a temporary prosthetic leg.

Upon returning home, Stanley continued to run his merchant business in Wyndham and died at the age of 81 in 1959.