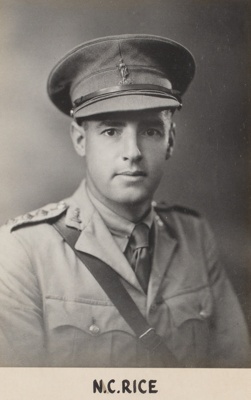 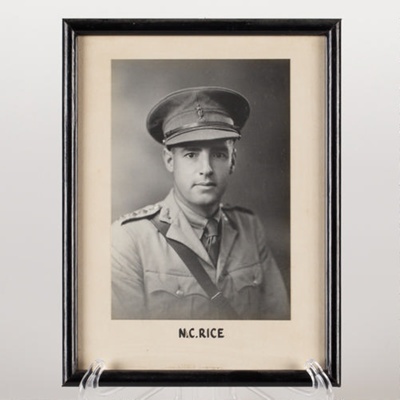 This photograph is of Melville Clark Rice (7191), a local man who was killed during WWII.

Born the eldest son of Ellen and Stanley Rice, Melville grew up on Alma Street in Wyndham. Prior to the war, Melville worked for his father’s accounting firm and then later, as the Wyndham Town Clerk and the secretary of the Oware Dairy Factory. Melville also held the position as the Secretary for the Wyndham Branch of the National Party, and was associated with many other Wyndham organisations.

Melville served as a Captain with the 20th Battalion, and was held in high regard by the men that he served with. Captain Rice was killed on Crete on May 20, 1941, aged 36, and is buried in the Suda Bay War Cemetery, Crete, Greece, 12.E.13.

Melville received both a Member of the Most Excellent Order of the British Empire Medal (MBE) and a British Empire Medal (BEM). Lieutentant-Colonel H.P. Kippenberger, recommended Captain Rice for the Military Cross for gallantry in the field during the Campaign in Greece and wrote to Rice’s wife regarding the recommendation stating, that Rice was ‘one of the sweetest and noblest of characters’ and conveyed his ‘admiration for her husband’.

‘The company in front started to retire, and like the gallant soldier he was, he refused to retire himself and it was while encouraging and directing his men that he was hit and died instantly… All through the Greece campaign he was cooler and valour itself. When his company came under fire from planes and 30 of his men were hit, he looked after his wounded regardless of danger and moved steadily and unshaken into his position. I recommended him for the Military Cross for this and his general bearing in that campaign.’

The Lieutentant-Colonel concluded by expressing that, ‘no man did more to establish the tradition of loyalty and devotion in this battalion.’
Melville's wife, Mavis, is recalled as being an elegant and friendly person who remained in Wyndham, with their two children, for a little while after her husband's death.

Interestingly, it is worth noting that Melville's father, Mayor Stanley Rice, lost a leg at the Battle of the Somme in the First World War.