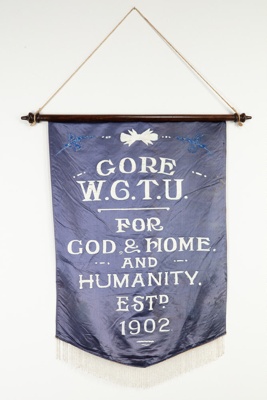 This banner belonged to the Gore Women's Christian Temperance Union who were part of the 'Blue Ribbon Army'. The Army comprised of like-minded temperance groups that flourished in the late 19th and early 20th century. Their common aim was the prohibition of alcohol, which was seen as the cause of many of the problems in society.

The women were banding together to effect change. In an era when they were largely dependent on men, they were the ones most affected by easily available alcohol. Their objectives, through education and example, was the protection of the home and the promotion of God and Humanity.

Change was realised when localised prohibition (no-licence) was successfully introduced in the Mataura Licensing District in July 1903 and continued for 51 years.