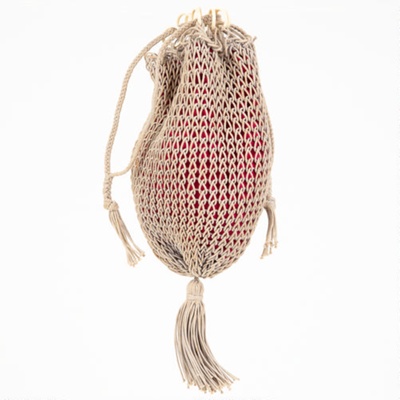 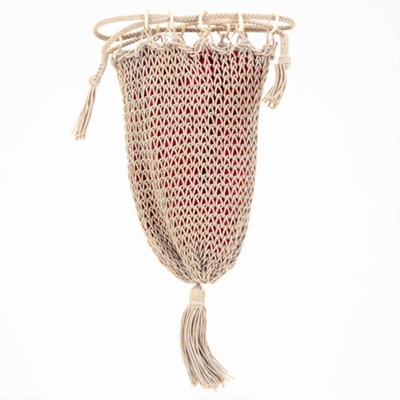 This small grey string bag was made by Andrew Johnston. The bag is lined with red/pink cerise satin and features drawstring handles and a tassel at the bottom.

Andrew Johnston and the making of the bag:

In 1917, while working on the family farm, Comely Bank in the Waikaka Valley, Andrew Johnston was drafted by the New Zealand Army to serve in World War One. At the age of 22, Andrew was blinded during the Second Battle of the Somme. Andrew’s military records state that on May 4, 1918, he received wounds to his face, eyes and right shoulder resulting in a loss of sight. As a child, our regional curator Jim Geddes spoke to Andrew, who told him that the cause of his blindness was mustard gas.

Andrew was admitted to St Dunstan’s, London, a specialist facility for blind servicemen. Government rehabilitation schemes throughout the world emphasised getting disabled servicemen back into the workforce. This emphasis resulted in rehabilitation focusing on vocational training. At St Dunstan’s, Andrew learnt braille, typing, poultry farming and netting. Andrew used his netting skills to make this string bag.

Andrew Johnston after the war

Andrew met his wife Helen in Scotland while he was undertaking his rehabilitation in St Dunstans. The pair settled in Gore and had a son George. While Andrew initially used his new skills to gain work as a typist and a poultry farmer, his true calling was as an Evangelist. While farming, Andrew was very involved in the Baptist Church and began preaching. Gradually, Andrew was asked to preach at various conventions and churches, leading to his appointment as an Evangelist with the New Zealand Bible Training Institute in Auckland. For twenty years Andrew and Helen traveled the country on missions. The first night of each mission began with Andrew recounting his story and the second night was devoted to his calling as an Evangelist.

Andrew was admired for his independence and was affectionately known throughout Otago and Southland as the 'Blind Evangelist'. This affection extended to Johnston Street in North Gore being named in his honour.