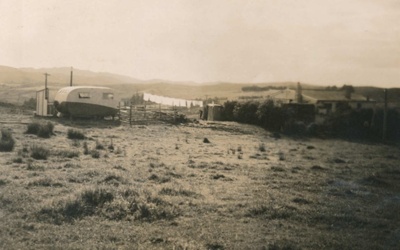 The caravan on Wright's farm where Edna lived after Geoff was conscripted into the NZ Army. The Wright's home is behind the hedge on the right.

Edna Rashleigh nee Osborne b. 1914 d. 1996 married Geoff Rashleigh 1940.
They started a sharemilking contract with Cliff Bowmar, Mangawai. In 1942 Geoff was conscripted into NZ Army. At that time Edna was pregnant and lived in a caravan on Fred & Helen Wright's farm off Kaiwaka/Mangawhai Road. Beryl Nita Rashleigh was born 21/4/1942. Geoff died of wounds at the Battle of Monte Cassino, Italy in 1944.

Edna then went sharemilking for Bill Wright, then Harry Wright and Fred Bowmar (milking and housework) to support herself and Beryl.

The Kaiwaka community built Edna a home in 1948 on SH1. In 1950 Edna went to look after the farm of Noel Langdon in Paparoa and care for Noel after he was injured in an farm accident. She married Noel in 1951.