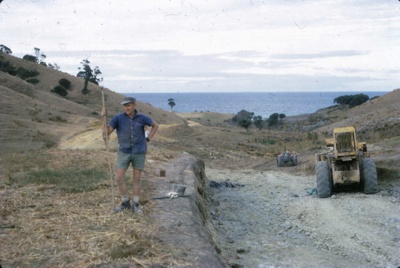 Denis Shepherd (brother of Paul Shepherd) on the new road which went out to the beach at Bream Tail Farm, Mangawhai.

In the 1940's Raymond Wharfe and John Desmond, known as Jack, Wharfe took over the land from their father and called it Wharfe Brothers Farm. Jack married Gwenneth Wharfe nee Phillips and they lived at Wharfe Brother's Farm, Mangawhai Heads. They had three daughters, Heather, Ruth and Colleen. Ruth Wharfe married Paul Shepherd in 1971 and at that time Paul bought Raymond's share of the farm and went into a 50-50 parnership with his father-in-law, Jack. Paul renamed the farm Bream Tail Farm. The farm was eventually sold in 1978.