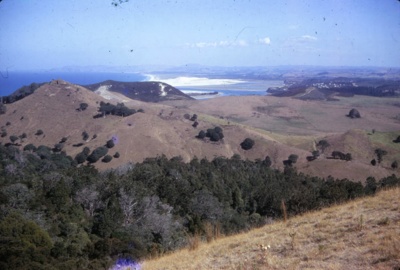 February 1970. Bush Hill looking southwards towards Te Arai. The photo is taken from Trig Hill which is on the original Hannah Block, Bream Tail Farm, Mangawhai.

Mr Hannah, a surveyor, originally owned the land (part of the Molesworth Estate and now known as Bream Tail Farm 2018) and he built the first homestead near the Trigg station. This became known as the Hannah Block. After other owners the land was purchased by Alfred Wharfe.