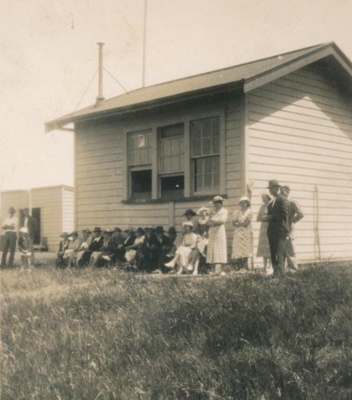 Opening of the Shelter Shed 1949 at Tara Road School, Tara Road, Hakaru.
Parents and pupils gathered to celebrate the new shelter shed and general maintenance on the school building by having a 'tea' at Hilton Brown's property.

The first public school for Hakaru (Mangawai) students was built by McMillan & Stewart on Lawrence Road, two miles from Hakaru. The school was formally named Mangawai School by the Education Department, although we have found it known as Hakaru School, Upper School and Bush School.

In 1878, 1889, & 1891 letters were sent by the residents of Tara requesting that the Lawrence Road school be moved to a site closer to where most of the children were living, because the children attending the Lawrence Rd school were getting older and it would only leave a very few children at that site.

Finally in 1892 the school was moved by bullock teams from Lawrence Road to the corner of Tara and Cove Roads which they called the ‘Finger Post Corner’, where the sign for the Tara Cemetery was. This then became The Tara Road School.

The Tara Rd School opened at its new site in 1892.

By 1926 the number of school-aged children near the school site had dwindled to a few, so it was decided to move the building nearer to where the majority of the families lived. That was down Tara Road, by bullock teams again, to Brown Road and on to the Stewart property.

In 1935 for the first time Tara School became a full time school.
The school in Brown’s Rd. closed around 1943 and the children of the area were taught by correspondence until 1945 when the building was moved, by truck this time, to a site on Hilton Brown’s property in Tara Road which is now Ken and Gayle Brown’s property. (2015)