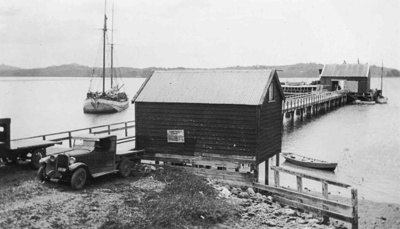 Mangawai Wharf c1918 showing the wharf trolley on left and a scow possibly the 'Jane Gifford' or the 'Titoki' at anchor. The steamer 'Kawau' is tied up at the end of the wharf.

In 1880 finance was made available for a wharf to be built at Mangawai landing at Mangawai Village.
The successful application for 600 pounds from the Public Works Dept. by the Mangawai Highway board, had been drawn up by Mr McDonald, C E Auckland.
Mr TW Webster was chairman at the time, and he and his Board members contacted Mr A Stewart to get the construction done.
In 19th February 1881 the Daily Southern Cross reported that the new wharf at Mangawai was nearly complete, and reflected great credit on the contractor Kenneth Stewart.
The main proportions of the wharf were:
330 feet long by a breadth of 10 feet.
Handrail along one side of it and a curb on the other side. Iron train rails were fixed on which a trolley or truck ran, for transporting goods either to be exported or for delivery of that which had arrived.
Across the far end of the wharf, a 'T"'section was added. This was 40 feet by 19 feet. On this section a warehouse was built 34 feet by 19 feet was erected with a door that hung on rollers. The door was 10 feet wide by 8 feet high which gave room for cargo to be loaded directly from ship to safe storage.
In 1881 Mr Wilson was still Hotelier and also manager of The Store, where he was acting 'Wharfinger' . It was a booming trade as huge tonage of Kauri gum was written up, passed through and loaded for export to Auckland. The wharf became a focal point for inland industries, involved in the export of goods and cargo. For passengers, travelling to Auckland, it was a huge improvement to all previous services that had meant rowing, then climbing from a dinghy to the cutter or schooner.