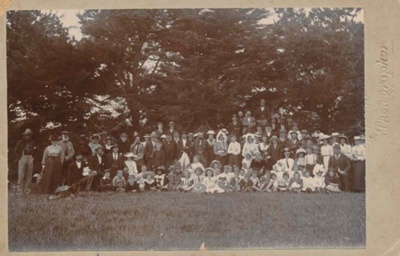 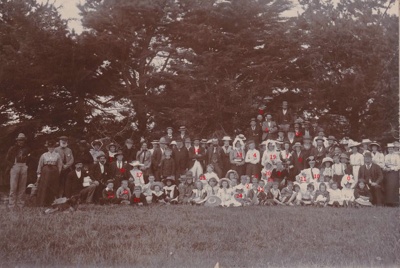 There is an in-depth description of these picnics in Papers Past, New Zealand Herald, Volume XXVI, Issue 9259, 12 January 1889.

This Papers Past article describes the Stewart family and Mrs Sarah of Hakaru inviting family and friends to attend a picnic at Hogan's farm on Black Swamp Road, Mangawai. They assembled at The Cornish Arms Hotel at Hakaru, and made their way to Mangawai accompanied by musicians. After the picnic they went to Mr W Sarah's store and danced the New Year in.

Bottom row sitting: Third from left Alfred George Williams, his wife Jane Williams. In front of them are their three sons William, Leonard and Albert Williams.