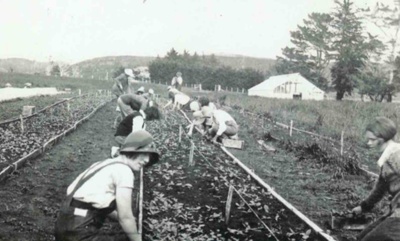 Girls were employed by The Empire Tobacco Company to work at Tomarata. They lived in a hostel supplied by the company and earnt one shilling per hour. At one time there were 20 girls from Auckland and 10 local girls employed. Approximately 500 acres were in tobacco.

The tobacco growing industry was established in Tomarata and set up by The Empire Tobacco Corporation Ltd in April 1929. The company offered cadet training for local boys to learn the cultivation of tobacco and were promised 5 acre blocks to manage. A drying shed, glasshouse, nursery, hall and hostel were established.

In 1933 the company was put into liquidation due to the introduction of an illegal form of selling shares, which resulted in losses to the shareholders after 3 years of operation.

This photograph is part of a large collection donated by Bev Ross which includes photographs, documents, books, research material and letters covering many familities that were settlers in Mangawai and surrounding districts.