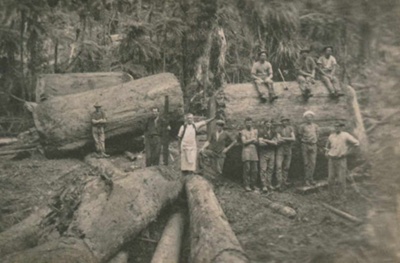 Kauri logs in the bush where the steam hauler had left them. These are ready to be jacked up the skids and loaded on to the tramway to be hauled to the mill by horse team. The horse team of 3 worked in tandem. One team belonged to the Cashmore Brothers and the other two belonged to the driver, Harold Benjamin Browne, known as HB. Information source from H.B Browne writings.