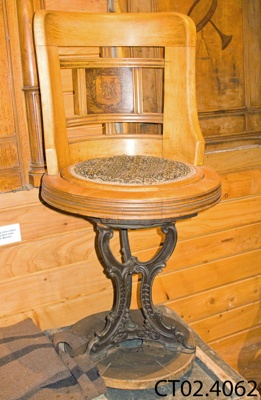 Saloon chair; a saloon chair from the S.S. Manuka. Constructed from varnished wood and cast iron, the chair is raised on three, ornately cast metal legs and has a round seat and rounded, wooden back inlaid with the cypher of the Union Steamship Co, New Zealand Ltd. The seat features a removable tapestry cushion, beneath which is woven cane. The cushion was removed when sailing through the tropics, the cane being cooler to sit on.