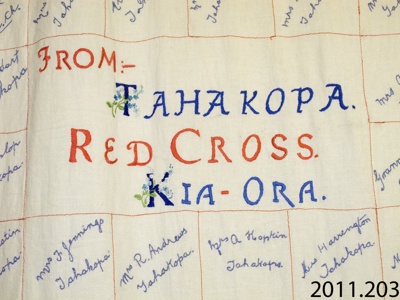 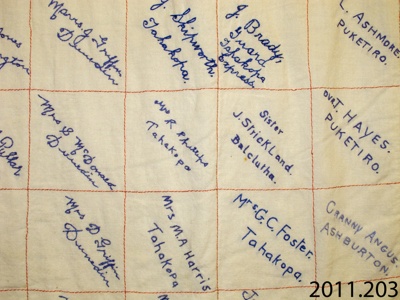 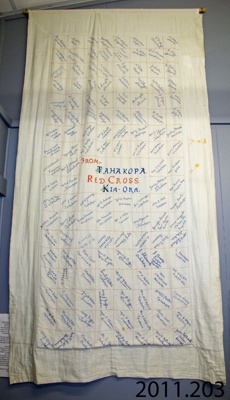 Quilt; a large, quilt made from squares of flour bag fabric. Each square is embroidered in blue with a name. The central panel is embroidered: "From Tahakopa Red Cross, Kia Ora".

The quilt is one of several made during World War Two, by the then newly formed Tahakopa Red Cross and the Country Women's Institute (CWI). Good washing material was hard to come by at the time, so the humble flour bag came into good use and was marked into squares. For one shilling per square anyone could have their mane embroidered onto it by members of the Tahakopa CWI committee. The central panel was designed by Mrs Stoddart, president of the committee. Seven pounds were raised from this quilt, and were sent to the Red Cross Headquarters.

This quilt was first used in Egypt during World War Two, after which it went to Vietnam and was used in hospitals there. Eventually it was sent to England, where it remained for many years. It was later returned to New Zealand and donated to the Owaka Museum.