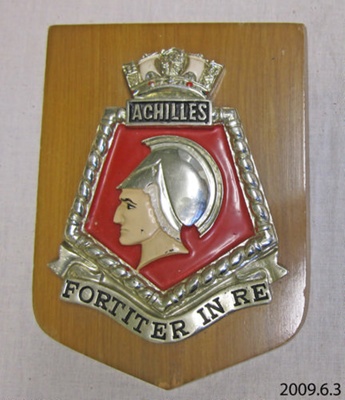 Commemorative plaque; a wooden, shield-shaped plaque with a three dimensional emblem representing the HMNZS Achilles. The emblem consists of a crown over a pentagon containing a profile of a Greek soldier, below this is a banner reading: "Fortiter In Re", meaning 'Firmness in action'.

HMNZS Achilles was a Leander class cruiser which served with the Royal New Zealand Navy in World War II. She became famous for her part in the Battle of the River Plate, alongside HMS Ajax and HMS Exeter.