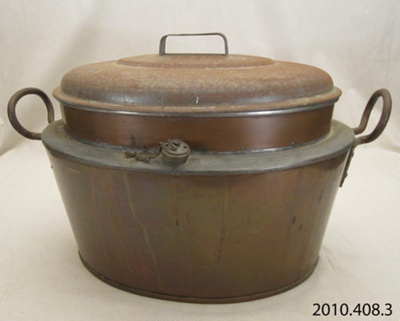 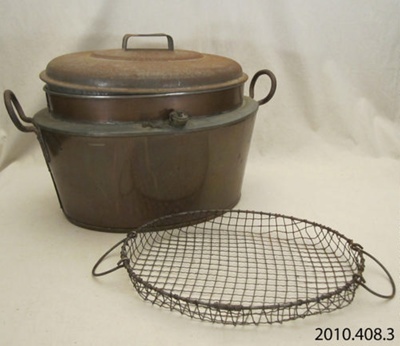 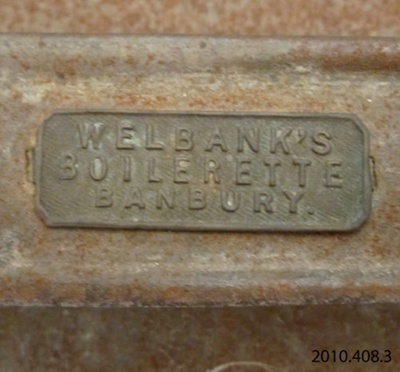 Pressure cooker; an early pressure cooker, known as a 'Duplex Boilerette', made in the United Kingdom by Mr R W Welbank. Manufactured in the late 19th century, the cooker consists of an inner steel[?] and outer chamber of copper. The inner chamber has a removable oval lid with top handle, under this is a removable insert of wire mesh, presumably used for steaming. The outer chamber is accessible via a small opening on one side, sealed with a valve. This chamber would be filled with water which then boils under a slight pressure, ensuring the food in the inner chamber is kept at boiling point.
Several newspaper articles from 1895-1897, describe the Duplex Boilerette as a 'very ingenious and useful invention', being especially 'useful for invalid cooking' and 'invaluable to nurses, especially in preparing food in the night time for their patients' because it requires no attention and cooks 'without any possibility of the contents being burnt, and as quickly and more efficiently than in an ordinary saucepan'.
This particular boilerette belonged to Ivy Patterson (nee Wright), who lived in the Catlins from the age of 17, she worked at Whites Store, Owaka during World War One. After the war she married Stanley Gordon Patterson of Dunedin and they took up a farm in Glenomaru.

Made at the Duplex Boilerette Works, North Newington, Banbury.

Being a direct descendent of Mr Welbank it was very interesting to this image, but would like to point for the article the correct spelling of Welbank is with one 'l' as you will see from the label on the boilerette it self 'Mr R W Welbank'.